Stuck In the Past

When we medicate with alcohol, we experience a number of results, not all of which seem obvious at the time. Most of us, though not all, experience a pleasant “buzz”, feel more relaxed, and some social awkwardness may disappear. Nothing wrong with those “benefits” up to a point.

That point arrives when we continue consuming in hopes of maintaining that state of mild euphoria, or at least delaying the depressive crash that is alcohol’s other side. Alcohol is, primarily a depressant, after all, which is why some of us use it primarily to come down from adrenalin highs – which explains why our physician-clients are ER Doctors and Surgeons and the lawyers primarily litigators and criminal defense attorneys.

Yes, drinking has its benefits, at least short term.

But, as you know, there’re also downsides.

Many of us, myself included, came to drinking excessively to numb trauma. It works for that, again short term.

But, yes, another of those pesky “buts,” it also prevents us from healing from these traumas. For many of us, we wake up and a trauma years, even decades, old seems like it occurred yesterday. Even dreams dredge up long forgotten incidents and in a half awake state we find ourselves perseverating on old hurts even though the perpetrators are long dead.

Some of this is a result of alcohol’s depressive effects. That’s a result of our mind’s negative bias, as demonstrated by our tendency, when feeling “down,” to dredge up every memory that supports feeling even worse. When we’re happy, of course, we have no need to recall supportive “happy” memories to reinforce our good moods.

All of this is by way of saying that a benefit of moderating or ending our alcohol use goes a long way towards improving moods, sleep, and the healing of trauma all of which reduce our tendency to over indulge.

I’m usurping an article from the Wall Street Journal which I think is of interest, especially these days when it’s easy to be confused or mislead by all of the 12 Step/rehab hoopla. Historic perspective is always helpful in maintaining sanity, I think.

Does Evolution Want Us to Drink?

Alcohol is terrible for the human body, yet we’ve developed a strong taste for it, suggesting that it may bring other kinds of benefits. 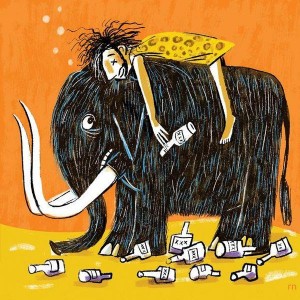 Alcoholic intoxication is an abnormal mental state characterized by reduced self-control and various degrees of euphoria or depression, brought about by the temporary impairment of a pretty big chunk of the brain. As the term suggests, it involves the ingestion of a chemical toxin, ethanol, which in small doses makes us happy, more sociable and better at thinking creatively and defusing conflicts. In progressively higher doses, it can lead to degraded motor coordination, slurred speech, violent arguments, maudlin expressions of love, inappropriate touching, injuries, blackouts, property damage and even karaoke.

Why do we do it? Historically, scientists have written off our affinity for intoxication as an evolutionary mistake, a method that we’ve developed for tricking our biological reward system into releasing little shots of pleasure for no good reason. But this is not a satisfying explanation. It should puzzle us more than it does that humans have devoted so much ingenuity and effort to getting drunk.

The first farmers may have been driven by a desire not for bread but for beer—no civilization without intoxication.

At sites in eastern Turkey, dating to perhaps 12,000 years ago, the remains of what appear to be brewing vats, combined with images of festivals and dancing, suggest that people were gathering in groups, fermenting grain or grapes, playing music and getting truly hammered before humanity had even figured out agriculture. In fact, archaeologists have begun to suggest that alcohol wasn’t merely a byproduct of the invention of agriculture but actually a motivation for it. The first farmers, on this view, were driven by a desire not for bread but for beer—no civilization without intoxication.

Once we begin to think systematically about the antiquity, ubiquity and power of our taste for intoxicants, the idea that it’s some sort of evolutionary accident becomes difficult to take seriously. Evolution isn’t stupid, and it works much faster than most people realize. Tibetans have adapted genetically to living at high altitudes and boat-dwelling Southeast Asian peoples to diving and holding their breath underwater. If alcohol were merely hijacking pleasure centers in the brain, evolution should have figured it out by now and put a firm end to this nonsense.

Other vices can plausibly be seen as necessary appetites gone wrong, such as our taste for pornography or junk food. But alcohol is mind-bogglingly dangerous, both physiologically and socially. The fact that our supposedly accidental taste for it has not been eradicated by genetic or cultural evolution means that the cost of indulging in alcohol must be offset by benefits.

Evidence from archaeology, history, cognitive neuroscience, psychopharmacology, social psychology, literature and genetics suggests what some of these benefits might be. For instance, the ancient and cross-cultural view of alcohol as a muse is supported by modern psychology: Our ability to think outside the box is enhanced by one or two drinks.

This is why artists, poets and writers have long turned to drink. The name of the Anglo-Saxon god of artistic inspiration, Kvasir, literally means “strong ale.” This is also why some modern companies that rely upon innovation, like Google, judiciously mix work with alcohol—by, for instance, providing whiskey rooms where frustrated coders can relax and expand their minds when struggling with a challenging problem.

There is also wisdom in the Latin saying in vino veritas, “in wine there is truth.” Alcohol impairs our ability to think strategically and puts us firmly in the moment, which makes us less capable of lying. In the same way that we shake hands to show that we are not carrying a weapon, downing a few shots is a form of cognitive disarmament that makes you more trusting and more worthy of trust. This is why, throughout history and across the world, treaties and trade deals are seldom negotiated without copious quantities of liquid neurotoxin.

It’s also why the advent of Skype and other teleconferencing technologies had no measurable effect on business travel before the Covid-19 pandemic. For a business in London, Zooming with potential partners in Shanghai instead of flying there would mean a considerable savings in time and money. Yet people still endured long trips and jet lag in order to gain access to the subtle, crucial social cues that sitting around a table doing shots of sorghum liquor provides. Once the Covid-19 crisis passes, expect business travel to bounce back to pre-pandemic levels.

Consumed in moderation, alcohol also alleviates stress, enhances mood, makes us more sociable and provides a much-needed vacation from the burdens of consciousness. It is no accident that in the midst of the pandemic liquor stores have been classified as essential services almost everywhere.

But the long-term impact of the past year’s global lockdowns, which have rendered social drinking difficult, remains unclear. Studies show that people who have a “local”—a neighborhood establishment serving food and alcohol that they regularly frequent—enjoy better mental health and are more connected to their communities. In the wake of Prohibition in the U.S., the number of patent applications fell by 15%, suggesting that we might expect a decline in innovation and productivity over the next few years.

Chemical intoxication is clearly dangerous. Alcohol has ruined many lives and continues to ravage individuals and communities across the globe. What’s more, the relatively recent innovation of distillation allows us to bypass natural limits on alcohol content to produce incredibly potent spirits. Combined with increasing social isolation, this may make drinking more dangerous today than in the past, in ways that we only dimly appreciate. It’s all the more reason to understand the evolutionary rationale behind our drive to get drunk.

“—Dr. Slingerland is Distinguished University Scholar and professor of philosophy at the University of British Columbia. This essay is adapted from his new book “Drunk: How We Sipped, Danced and Stumbled Our Way to Civilization,” published by Little Brown.