Since you will be receiving this Newsletter on the day before Christmas it seems appropriate to offer my story of Christmas Eve in the Arctic. We hope this day finds you with comfort, hope, friends, family and whoever brings you joy. Merry Christmas and Happy Holidays.

Christmas On the Wing

In the fall of 1971 I returned to Point Hope in the far northwestern corner of Alaska for my second year of teaching. It was my fourth year in the Bush, and I felt I would soon head back to the Interior, but Point Hope was home to my adopted son, and I wished to spend one more year there before uprooting him. A gussak (white man) from Pennsylvania, I had much to learn from these people and their harsh environment. I was also to learn a great deal of respect for other interlopers like myself who serve there as best they can.

November’s harsh storms arrived with much destruction. The waves of the Chukchi Sea ate into underground caches, destroying tons of whale meat stored from the previous spring. Winds rolled in from the west, and 200 sheets of plywood disappeared one night from the remote housing project. A visiting social worker, spending the night in a small government house, was pinned under a bed and mattress for 14 hours when the wind rolled the house onto its roof. A polar bear drifted through the village and enjoyed the tastier parts of two dozen sled dogs, all conveniently staked out like popcorn on a string.

As winter approached I, like hundreds of other people sprinkled throughout the Bush, began making plans for Christmas. Catalog orders went out for gifts and Christmas trappings. I had learned earlier that all Christmas plans must be made by Halloween, and I felt a sense of accomplishment and security when the last request boarded the mail plane in early November.

By Thanksgiving it was time for the weather to improve, for the ice to lock, and for everyone to settle in for a long winter’s night. But it was not to go quite that way.

During the first 10 days of December the weather failed to shape up. The mail plane, a Twin Otter, managed to sneak in twice from Kotzebue, but the wind and snow made the regular thrice-weekly flights impossible. Intermittent radio reports from Kotzebue outlined the problem: bad weather, no flight, day after day. After December 10 even the attempts began to slack off.

December 20, no flights in 10 days. December 21, no flight. December 22, bad weather. December 23, sorry. December 24, clear weather but no plane; flights diverted to other villages with food and medicine.

Christmas Eve didn’t feel much like Christmas Eve. The weather had played the Grinch all too well, and our Christmas was sitting in a hangar in Kotzebue. We were depressed. It would have been a good year to be Russian orthodox, as they celebrate Christmas in January.

At eight o’clock, as children whose faith in Santa was about to be tested trundled off to bed, a vibration could be felt in felt in the air. In the arctic silence, planes sometimes can be felt before they are heard. Everyone felt it but on one mentioned it. No one mentioned anything. No one breathed.

In a few minutes the vibration turned into a sound. Houses emptied, and people searched the sky toward Cape Lisburne for a glimpse of lights. And the lights were there, the lights of the Otter as well as a Twin Beechcraft, homing in on the runway beacon.

The stillness was broken by the roar of three dozen snowmobiles racing for the airstrip. Within minutes they lined the sides of the runway, tail lights to the north, headlights pointing south. As the roars died to a muffled idle, everyone drifted toward the runway, waiting.

North of the point the planes circled and landing lights winked on. The roar and whine of the Otter’s turboprops increased as it banked one last time and dipped toward the runway. A cheer went up as it flashed past the snow machines, its wheels biting into the skin of the snow on the strip. Moments later, as the Otter taxied onto the apron, the Beechcraft followed it in, radial engines spitting fire into the night.

As the motors died, the people became as quiet as the planes. The cargo doors of both planes opened to disclose a boyish pilot, fresh from Vietnam, and a grizzled veteran pilot. Though clearly exhausted, the begun pulling mail sacks out of the planes. Sled loads of orange and green nylon and white canvas mail bags were moved to the tar paper post office. The planes emptied; the young pilot talked quietly to the postmaster. Yes, there were many more bags and boxes and a warehouse full of freight in Kotzebue. No, there would be no more flights that day or the next. Everyone had been flying for 14 hours and had reached the point of exhaustion. Pilots were permitted to fly only so many hours, and this was it.

The other pilot drifted over from his Beechcraft and allowed that he might be willing to make one more trip if it could be arranged, but he wouldn’t promise anything. The crowd had drifted off toward the post office, and the snowmobiles were restarting to light the strip for takeoffs. Ten minutes later the planes’ lights faded out as they headed south for Kotzebue and home. 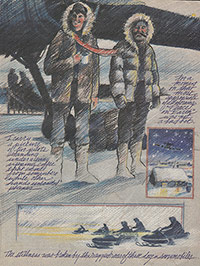 At the door of the post office people waited expectantly. Everyone knew only a fraction of the orders had arrived; everyone wondered if some of that pile was theirs and if, maybe, they wouldn’t have quite so many explanations to make to their children in the morning. The postmaster was perhaps the only unhappy person. The “rules” said he was closed, but if he had tried to enforce it he’d have ended up like a horse thief after a vigilantes’ meeting. With a degree of insight that transcends cultural differences, he opened the sacks. A Christmas honor system on all C.O.D.’s took effect, and the mail evaporated. Everyone headed home with one ear cocked south.

For a plane to make a round trip required about two and half hours, so everyone tried to quit listening for or thinking about planes for a while.

Then the vibrations started again.

I remember that no one said or did anything at the new sound. No one wanted to get excited over a possible false alarm. Consequently, many of us were a little late getting to the landing strip.

There were the two planes again silhouetted by the headlights of many snowmobiles. The delivery sequence repeated itself, with sacks of cards and letters going to the post office for sorting and the packages and freight taking care of themselves. A tired smile was the only reply from the younger pilot when asked how he’d gotten permission for another trip, and the older man just chewed his cigar in a way that discouraged questioning.

Soon the planes were gone, and the village was quiet again. Many people chose to remain around the post office and mingle with friends, neighbors, and relatives. The depressed withdrawal of recent weeks was being replaced by quiet excitement and good will.

The remainder of the night passed in a sleepless repetition of events. The planes returned over and over again until the exact number of flights became confused in my memory, although a total of 12 or 13 plane loads feels about right. The last flight lifted off the runway around six o’clock as the children were beginning to awaken, and Christmas carols drifted from the speakers outside one of the stores.

The years since that Christmas have sharpened the memories of that night and details have been improved upon or forgotten. The accuracy of my memory really doesn’t matter much, because it was the spirit that mattered.

In my head I carry a picture of two pilots, standing under a wing, sipping coffee that appeared from somewhere, while many hands unloaded the planes. For a brief time all racial and cultural barriers were nonexistent, all people were at peace with themselves and each other. For a moment, on that most appropriate of all mornings, peace on earth was a safe bet.